...[T]hirty reporters and newsreel men representing the world’s Press came to the castle [Neuschwanstein] to catch a glimpse of the phenomenal treasure house. I had not attempted a search for individual works of art. As far as I was concerned, this was an intelligence and security operation until such time as the bulk of the things could be returned to the French nation. I would have liked nothing better than to take the time to study all of these objects. It would have been particularly rewarding to go through part of the Munich Schatzkammer (Treasury) which had been brought to Neuschwanstein by the Administration of Bavarian Castles. I doubt if the ERR knew it was there. One of the old Bavarian keepers of the castle had confided to me that access to these treasures was hidden behind the stove in the kitchen (J. Rorimer, 191).

Objects from the Treasury in Munich

My grandfather’s reference to the Munich Residenz and Treasury made it an obvious destination for me. Plus, who can resist the allure of the such beautiful gold, diamond and pearl-embedded objects! When I met with the current-day representatives of the Administration of Bavarian Castles (Bavarian Department of State-owned Palaces, Gardens and Lakes), they recounted another story about the beloved Munich Treasury. It is said that two days before my grandfather arrived at Neuschwanstein, the objects were removed from behind the stove and relocated to another secret location. It is a very good thing that the individuals working for the Administration of Bavarian Castles had the foresight to keep these treasures safe, and it’s amazing to think that thanks to their work, the treasury is in tact and on display for the public to see. Check it out the next time you’re in Munich! 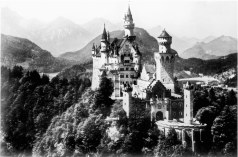 JJR with notebook on the steps of Neuschwanstein – MAY 1945. (National Archives and Records Administration, College Park, MD) 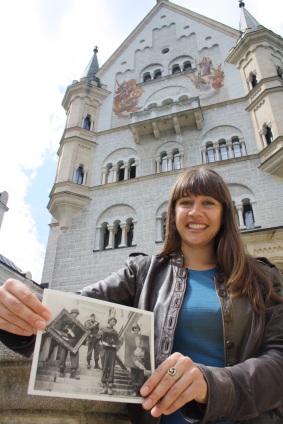 The famous photo brought me here

SSR with notebook on the steps of Neuschwanstein – August 2014